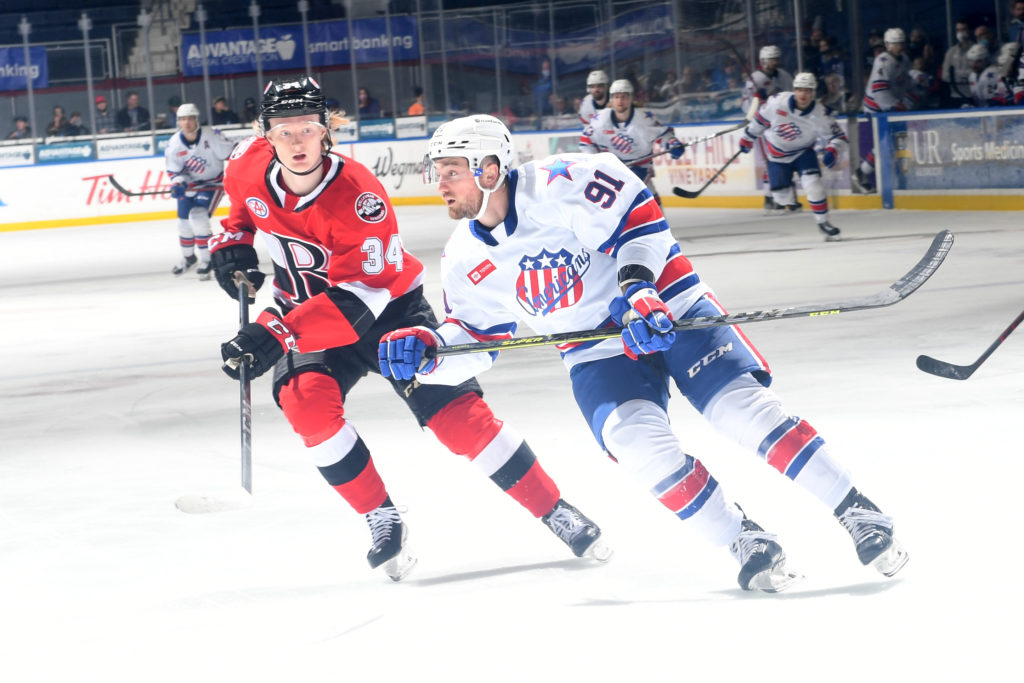 Egor Sokolov scored thirty-one seconds into overtime to ensure the Belleville Senators a two-game series sweep of Rochester Americans with a 6-5 victory on Saturday afternoon at Blue Cross Arena.

Jonathan Aspirot opened the scoring 5:33 into the game, finding the net’s back from the right point. Despite being heavily outshot, the Amerks tied the game on the man advantage with 6:35 left to play in the stanza.

Rochester took a 2-1 lead early into the second period when Jack Quinn tallied his first of the game. Just over four minutes later, Matthew Wedman answered for Belleville after tremendous offensive work from the BSens’ fourth line. Jack Quinn would restore the Americans’ one-goal advantage on the power play. Cole Reinhardt evened the score at three on a breakaway effort after using his speed to split the defence with twenty seconds to play in the second.

Belleville retook a 4-3 lead at 8:58 of the third period when Lassi Thomson delivered from the high slot. The Amerks answered a minute later when Jack Quinn completed his hat-trick. The back and forth continued when a Logan Shaw redirection put the Senators back in front with 1:57 left to play. In the dying seconds of the third, Michael Mersch forced overtime with the extra attacker on the ice.

“It was another back and forth game much like last night. I thought again I really liked our five-on-five game. Certainly, we kept their shots on goal down. Overall we showed a lot of resilience coming back a number of times. It’s never good to give one up with three seconds left, but it was nice to get the win in overtime.”

The Belleville Senators are back in action Monday afternoon when they visit the Syracuse Crunch. You can hear the game on the Senators’ Official Broadcast Partner 800 AM CJBQ or see it on AHL TV. Coverage begins at 12:50 p.m with David Foot.