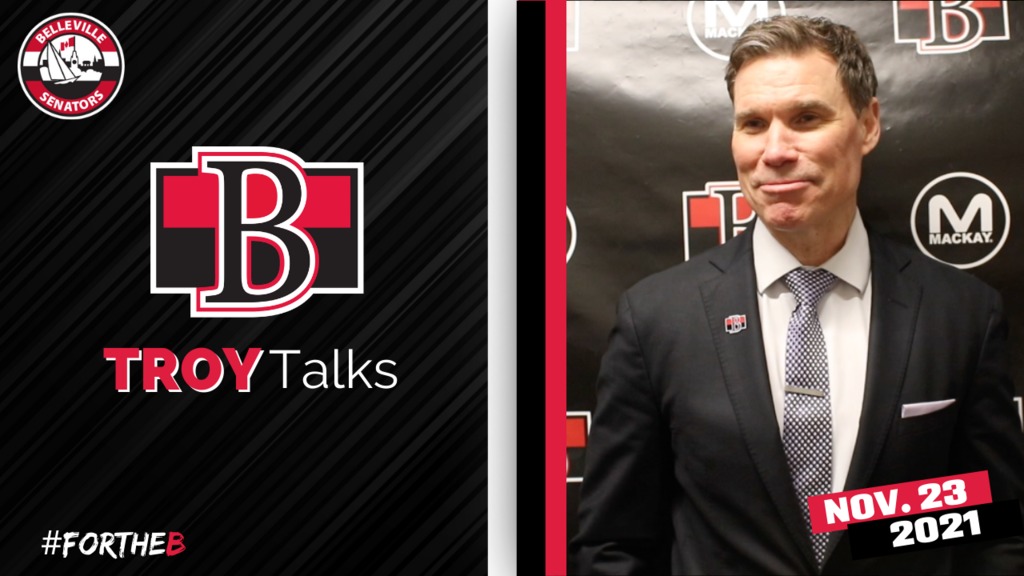 The Belleville Senators made the most of a light week last week and picked up a much-needed two points against the Laval Rocket, while also getting some players back after the COVID-19 issues in Ottawa. It’s back to a more normal three-game schedule this week though, as the Senators will visit the Syracuse Crunch for the first time this season on Wednesday, before visiting Laval on Friday and then hosting the Rocket at CAA Arena on Saturday.

We caught up with Head Coach Troy Mann to get some thoughts on last week’s win and more on how preparations are going for this week’s three games.

How important was It to win that game against Laval last week, even though it’s still early in the season?

“We try and break the season down into weeks and the goal is to get four-of-six points every time you play a three-game set. So, if you only play one game and don’t win, that’s two points you haven’t accumulated, and it allows other teams to get for our six points if they play more games. We felt it was an important two points in the standings because we want to play close that fifth spot and Laval is right there with us.”

Given the young age of the team and how often you play Laval, was it a confidence boost to get another win against them?

“Absolutely. We play them 12 times and Laval has a strong roster with very few rookies and a lot of experience, which is a bit of a different makeup from us. Right now, we’re in a battle for the same spots in the standings and we see them eight more times.”

What’s the message early in the week ahead of the trio of games this week?

“We came off a win, so Monday’s practice was very positive and upbeat. Going into our game Wednesday we’re looking at the standings and even though we don’t like talking about it so early in the season, Syracuse is off to a similar start to us. They’re probably battling some roster situations, trying to find their footing and climb as much as they can, so Wednesday will hopefully be another big win for us that gets the week off to a great start. It’s very difficult to sweep a home-and-home against the same team, so we’re not going to look too far ahead, but we’d like to start the week off right and bank those two points. Every win puts us closer to the .500 mark, which is something you strive for and then you look in the rear-view mirror, but you’ve got to get there first.”

How much different has it been now that all of the COVID craziness in Ottawa has died down?

“It’s nice to get bodies back. The level and quality of practice has been a bit higher, with no disrespect to the players who we’ve had here to help us out, but when you add quality players it means that your team not only gets better but your practices do too. We’re still trying to build some chemistry with new guys and there has still been a lot of movement within the roster, but hopefully we’ll be able to build more chemistry with our team on and off the ice.

Clark Bishop is with the team for at least a little while, what’s he going to add to the lineup once he’s healthy?

“I’m a big fan of him. I got to know him a bit as our season progressed last year while he was in Ottawa playing with us and on the taxi squad. He’s a high energy player, strong on faceoffs and the penalty kill and when he did play for us last year, I thought he added some offence, which hasn’t always been part of his resume. I’m looking forward to getting him into a few games, hopefully Saturday at home, but it will be up to him and how he feels. If he feels he can play Saturday at home he will, or it might be next week in Utica, but he practiced today and will get two morning skates and a practice in on the road trip. We’ll make the decision when we get back to Belleville, but I expect we’ll see him in the lineup in the next week.”

The Belleville Sens acquired veteran defenseman Jack Dougherty this week, how nice will it be to add another familiar face to the team?

“It will be great. One thing we’ve done here the past couple years is build a real good culture in the locker room, especially with a lot of young players and all the turnover we’ve had. We’ve also had some issues on the back end with injuries and recalls, and it’s not fun as a coach for the organization to be scrambling for call-ups. Jack has only played one game in Providence, so we took a chance to acquire a familiar face and someone who is familiar with the systems and the coaches. Obviously, it adds to our number of veterans, but we’ll manage that as best we can. Now that Lassi Thomson will be in Ottawa, at least in the short-term, we’ll look to get Jack into a game this weekend and see how things progress from there. Ottawa still has three games to play in California and whether or not they get out of those games without any injuries, only time will tell.

Lassi Thomson made his NHL debut last week, how do you feel he has played with the big club so far.

“I haven’t seen every shift, but from what I have seen I think he’s played very well and probably exceed expectation to some degree, considering we were hoping to have him ready for some time in 2022. He’s made the most of it and is quite the student of the game. He understands where he needs to get better and he’s become a really good pro at a young age. Obviously they’re very happy with him in Ottawa, since Head Coach DJ Smith has complimented him after every game they’ve played, so it’s a great opportunity for him.

Any update on the injury front?

“Jonathan Aspirot and Mitchell Hoelscher are still out long term and won’t be available until early January. Rourke Chartier has gone to Ottawa for some tests and will hopefully be cleared for contact once we’re back from the road trip. We’re targeting maybe the weekend set with Manitoba (December 4 and 5) for him to play. Bishop will be in the next week. So, beside Crookshank, Aspirot and Hoelscher, we’re getting close to a full lineup with Bishop and Chartier both on the horizon here.”