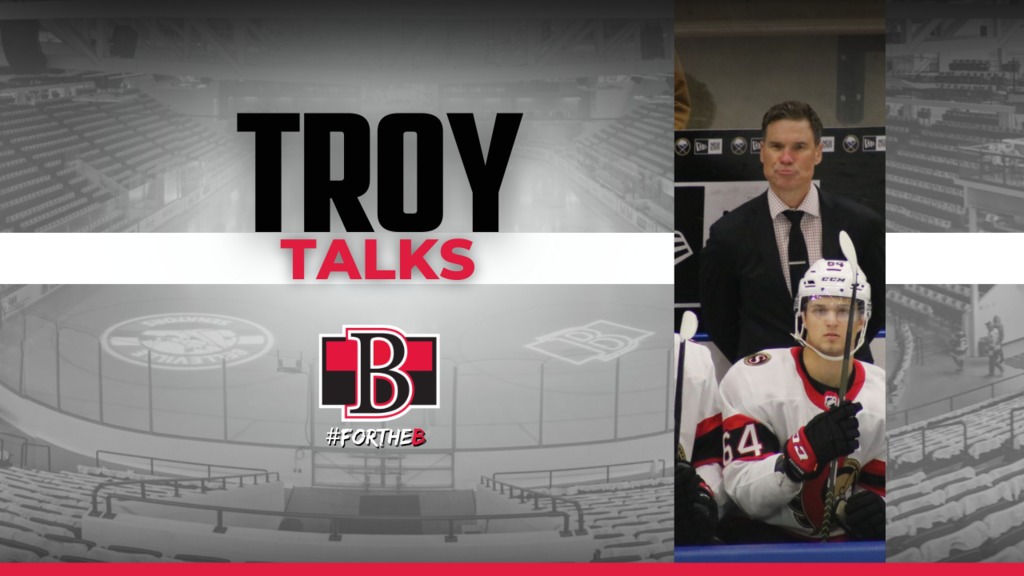 The countdown to hockey season is officially on, as National Hockey League training camps have opened, including that of the Ottawa Senators. Prior to camp, some of the Sens top prospects (including a handful of Belleville Sens players and staff) gathered in Buffalo, New York for the 2022 Prospects Challenge. Despite high expectations, Ottawa went winless over its three games at the event, losing to Boston (4-3), Montreal (7-2) and Buffalo (6-3). While the goal is always to win, Belleville Senators Head Coach Troy Mann tells us in this week’s “Troy Talks”, the opportunity to evaluate players ahead of the American Hockey League campaign, still made the trip worthwhile.

What did you take from the four-day event, despite the poor results?

“Your goal is always to win hockey games, but I think you always have to keep things in perspective and look at the bigger picture. This tournament was more about evaluation on three levels, the players perspective, the coaches’ perspective, and management, who were all there watching. If we’re going to take the positives out of it, there were some good performances and as I’ve said to multiple people in the last 24 hours, you always walk away with a better feel for those individual players, their potential, and if they have what it takes to eventually play in the National Hockey League. It’s just a chance to evaluate the three tiers of players that were there – the draft picks, the guys heading into their second year of pro and the invites.”

One of the guys you were most excited to see was Angus Crookshank, who hadn’t played in a full year due to a knee injury. Do you feel like he met your expectations?

“No doubt about it. When I look at the three games overall and selfishly as the Belleville head coach who is watching the players we know will be in Belleville to at least start the season, Angus Crookshank did everything we anticipated. He probably exceeded that expectation to some degree, ultimately after not playing a hockey game for a year. I think when you sit down and look at the number of forwards we had on the roster, I think it’s fair to say that after three games, he was not only our most consistent forward, but our best forward. That’s great for him, not only moving forward in the organization itself, but also for what we think he can do in Belleville this season.”

The rookie tournament has been tough on the franchise the past couple of years, because of injuries (Angus Crookshank last year and Viktor Lodin, Zach Ostapchuk, Kyle McDonald, Zack Massicotte this year), does that change how you approach those games? Or are they still necessary to play?

“In my opinion, we’re at the rookie showcase for a reason and I’m a huge proponent of it. I think it’s a great opportunity to get the whole organization together to mingle and get to know some of the amateur scouts, who you only see at the draft. I think that’s a very positive environment and it’s good to get to know those people who are doing the work behind the scenes and drafting your prospects. And as I said, from the on-ice perspective, it’s a great evaluation tool. Obviously there are risks and there are going to be injuries, this year was no different, but you just hope those players will be able to return to action quickly.”

Among the players you evaluated throughout the tournament, what are your thoughts on Quinte Red Devils grad Dalyn Wakely, and his North Bay teammate Kyle McDonald, who were both free agent invites?

“They’re both kind of in different situations, with McDonald eligible to turn pro and Wakely having to return to the Ontario Hockey League, but I think both guys had their moments throughout the tournament where they showed that potential that ultimately got them the invites, but there were moments of struggle as well. That’s why you do these tournaments, to coach these kids as much as they can and give them an idea of what they can anticipate at the pro level, because the American Hockey League is hard, and the National Hockey League is harder. They get to learn that some of the plays they might get away with at the major-junior level are just not possible, even at a rookie tournament. Both got invited to Ottawa’s main camp and as an invite, that’s the goal. It’s a quick turnaround, they’re getting a lot of info in a very short amount of time and then they play three games in four days. The goal is to make it to the next step, which is main camp and they both did that.”

You’re also evaluating players preparations and development off the ice. Who else stood out to you in that respect?

“I thought Max Guenette was great. As much as we were impressed with Crookshank’s performance, I do believe Max showed a lot in those three games with his work ethic and compete. He, obviously from my perspective, left the tournament where he was our best defenceman. So, from the Belleville coaching perspective, I think he made the next step and has got his season off to a great start which bodes well for him. I know DJ Smith, who watched two of our three games, was very impressed with Max and brought his name up to me both nights. Again, I can’t say enough about what Crookshank brought to the table in terms of his leadership and practice habits. He’s been around us and knows what we expect.”

Now that the rookie tournament is over, what do the next couple of weeks look like for you and your staff, as Ottawa’s training camp gets underway and you prepare to open Belleville’s camp on October 2?

“The players will do their physicals and off-ice testing to start on Wednesday, then (Ottawa Coach) DJ Smith will make a presentation and we’ll follow that up with a coaches meeting to figure out what we can anticipate of a staff. I know they’re breaking up into three teams, so there will be some practices and scrimmages mixed in, then they play a split squad game on Saturday against Toronto. It’s a quick turnaround in terms of making an impression, but that’s what the first few days look like. Then we’ll get into the rest of training camp, return to Belleville for the game against Toronto on September 30 and then get ready for our camp.”