Troy Talks: The split with Springfield, getting the offence going and a goaltending update 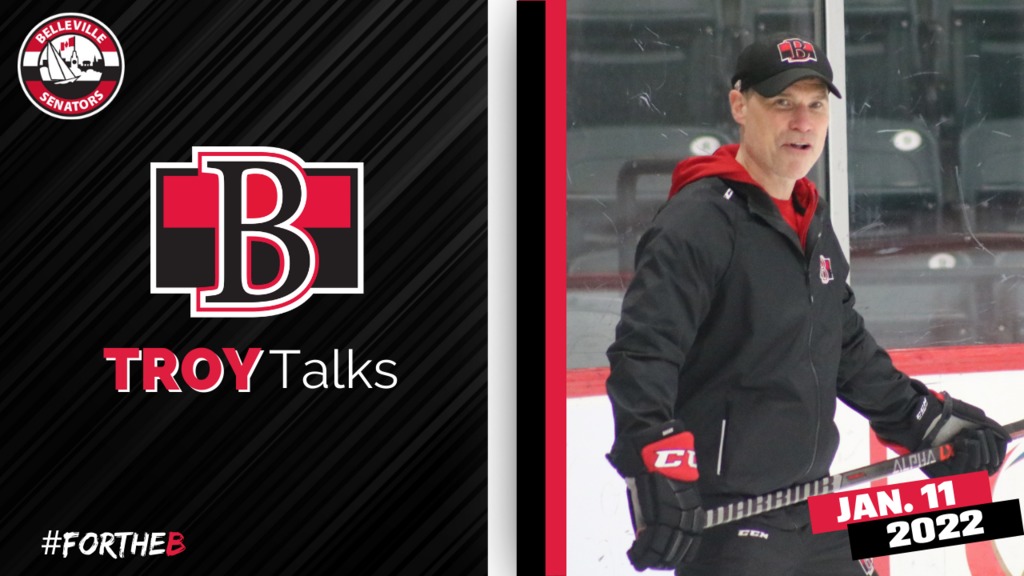 Following a two-game split with Springfield at CAA Arena last weekend, the Belleville Senators are preparing for an extended road trip that will see the team loop around Lake Ontario over six days, making stops in Toronto, Rochester and Syracuse.

With preparations for the team’s first trip over the border in about a month well underway, Belleville Sens Head Coach Troy Mann took some time to discuss last weekend’s results, the impact the seven-goal offensive outburst might have going forward and the current goaltending situation.

The team has been piling shots on recently, with 81 this past weekend alone, but hadn’t been scoring much until Saturday. What are your thoughts on last weekend’s games?

“I thought we played pretty well on Friday and had some opportunities to change the momentum of the game but couldn’t get a key goal to take the lead and they scored the goal in the third that held up to be the winner, but I didn’t dislike our game. I wasn’t crazy about our start on Saturday, I thought we were flat out of the gate, but we tweaked our matchups, got skating and it was nice to see goals go in, especially after we had to pull the goalie earlier in the game.”

There’s been some focus on guys like Egor Sokolov, captain Logan Shaw and others not meeting their offensive potential of late, but they found the scoresheet on Saturday. How important was it for them to contribute and what will they have to do to find some consistency?

“Anytime you’re a player that is known for scoring, it can be frustrating when they’re not going in. But we like to remind our guys that if you’re involved in chances for, either for yourself or your line mates, then you’re doing the right thing. You just have to stick to the process and they’ll go in for you.”

Is there a hope that the offensive outburst could lead to more production?

“We look at scoring chances in the recent games and we’ve been generating in the 20’s which is positive. We did that inToronto early last week, but didn’t get the important goals we need. While it was nice to get three on Friday and then seven on Saturday, so I think we still need to remember to play good defence. Keeping ourselves in the top 10 in goals against, will be the key for our team, it’s part of our DNA and how we need to play. Hopefully the power play getting jump-started last week and getting some other guys on the scoresheet, can help.”

Kevin Mandolese has been pulled in his last couple of starts, but are we just seeing a speed bump in the career of a young goaltender?

“I think there are speed bumps for every player. Mando came off an unbelievable start on January 1st , when we went into Toronto and won the game 2-1. He was a big part of that, but then he gets pulled the next two games. You have to expect those bumps, but it’s about how you come out of it. He’s got to work hard with Justin Peters to forget about it and prepare for his next start, when he’s ready.”

Coach Mann noted that Mandolese is has been placed on the team’s injured reserve list with a day-to-day ailment. Filip Gustavsson has been returned to Belleville from the NHL and will share the goaltending duties on the upcoming trip with Mads Sogaard. The list of currently injured B-Sens also includes Jack Dougherty, who’s out two-to-four weeks, as well as Angus Crookshank and Tyrell Goulbourne, who have longer timetables to return.

Belleville’s road trip begins Wednesday afternoon in Toronto (3:00 p.m.) with games in Rochester on Friday (7:05 p.m.) and Saturday (5:05 p.m.), followed by a stop in Syracuse on Monday (1:00 p.m.). You can hear all four game’s on the Belleville Sens Official Broadcast Partner 800 CJBQ or by subscribing to AHL TV.