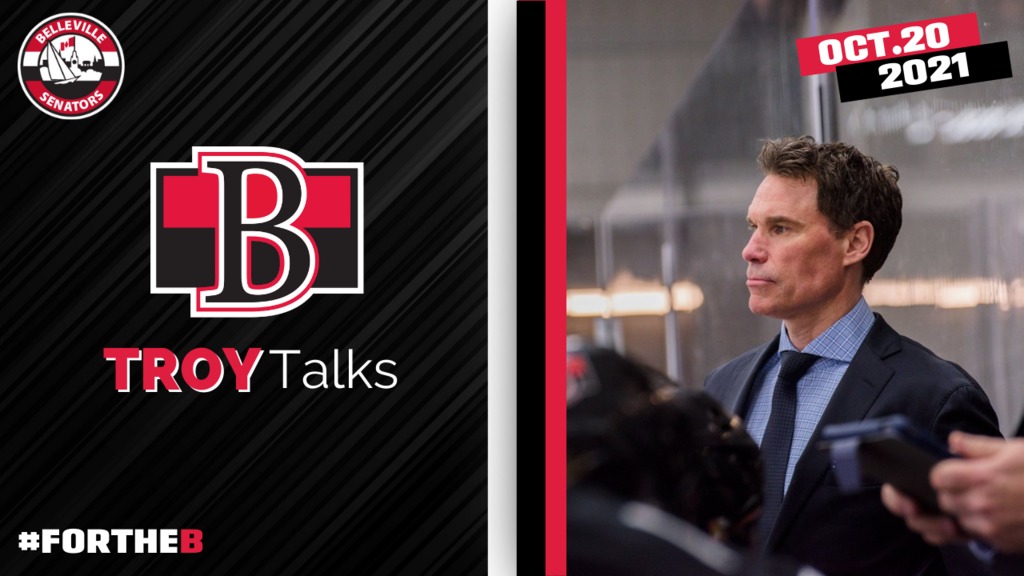 Coming off the Belleville Senators home opening win last weekend, the team has a stretch of five days off to prepare for the Cleveland Monsters on Friday (October 22) and Saturday (October 23). So, it seems like the perfect time to launch our new weekly feature “Troy Talks”.

We’ll catch-up with Head Coach Troy Mann once a week to get his thoughts on the previous weekend’s results, find out more about preparations for upcoming games, get updates on injuries and more.

1) How has the week been going with so much time between games?

“The practices have gone pretty well. When you have four practice days in between games it can sometimes be tough to get four quality practices, but I thought Monday and Tuesday were great. Getting that split on the weekend certainly brought the guys back to the rink with some energy. Looking back at last weekend, we accomplished every one of our objectives on Saturday compared to Friday night.”

2) Which players have been standing out to you and the coaching staff early on?

“I thought the line that gave us a bit of stability over the Friday and Saturday was the Wedman, Goulbourne and Sherwood line. They played with a real good identity by being physical and getting in on the forecheck, and they were awarded with a couple of goals. I like that there’s some identity to that line and hopefully they can continue to build on that. I think the one player who stood out individually was Lucchini. Coming in from the trade and getting acclimated really quickly, he certainly stood out as arguably our best forward on Saturday. I think he’s a guy that’s probably a bit underrated from an offensive standpoint and it was nice to see him get two goals on Saturday night.”

3) How are the preparations going for this weekend’s doubleheader vs Cleveland?

“What we’ve tried to focus on this week is our own team game. We did team video yesterday morning and today, based on Saturday’s game and areas of five-on-five play that were either positive or need work. We touched on power play today and are still trying to find the right combo and we’re going to tweak that going into Friday. We touched on that today and tomorrow’s special teams session will be more specific to playing against Cleveland.”

“It’s a situation where we get one back, but we lose one. Zac Leslie is close and could play this weekend if we get the green light tomorrow, he’s been skating in a regular game this week and looks very positive. Cedric Pare has made real good strides this week and is another player that could get the green light for the weekend, post practice tomorrow. Kameron Kielly still has a groin injury that’s coming along and is skating on his own still. He likely won’t skate with the main group until next week. Mads Sogaard is day-to-day and not available this weekend. He tweaked something in the game on Saturday and thought he was good but didn’t feel great on Monday at practice. We’re probably being a little bit cautious with him, but he won’t be ready until at least next week. Rourke Chartier has got an upper body injury that I would consider day-to-day, but he won’t play this weekend. On the positive side, Philippe Daoust is ready to go form his minor injury.”

“With Filip Gustavsson back from Ottawa he’ll start on Friday and who knows, if he stands on his head and gets a shutout, or only faces 25 shots, he might go back-to-back. But we do play on Wednesday and Kevin Mandolese hasn’t started yet, so it’ll likely be a split this weekend. I think we’ve got to put some trust in Mandolese too, so with Sogaard injured it’ll give us a chance to put him in a game.”

6) It’s been tough for some guys to find places to live and get settled, how’s that coming along?

“I’d say about 75% of the roster has moved in and is getting settled into wherever they’re living. The guys are pretty spread out across the area, a good chunk of them are down in Prince Edward County over the bridge, with a number of spots there available through the winter.”