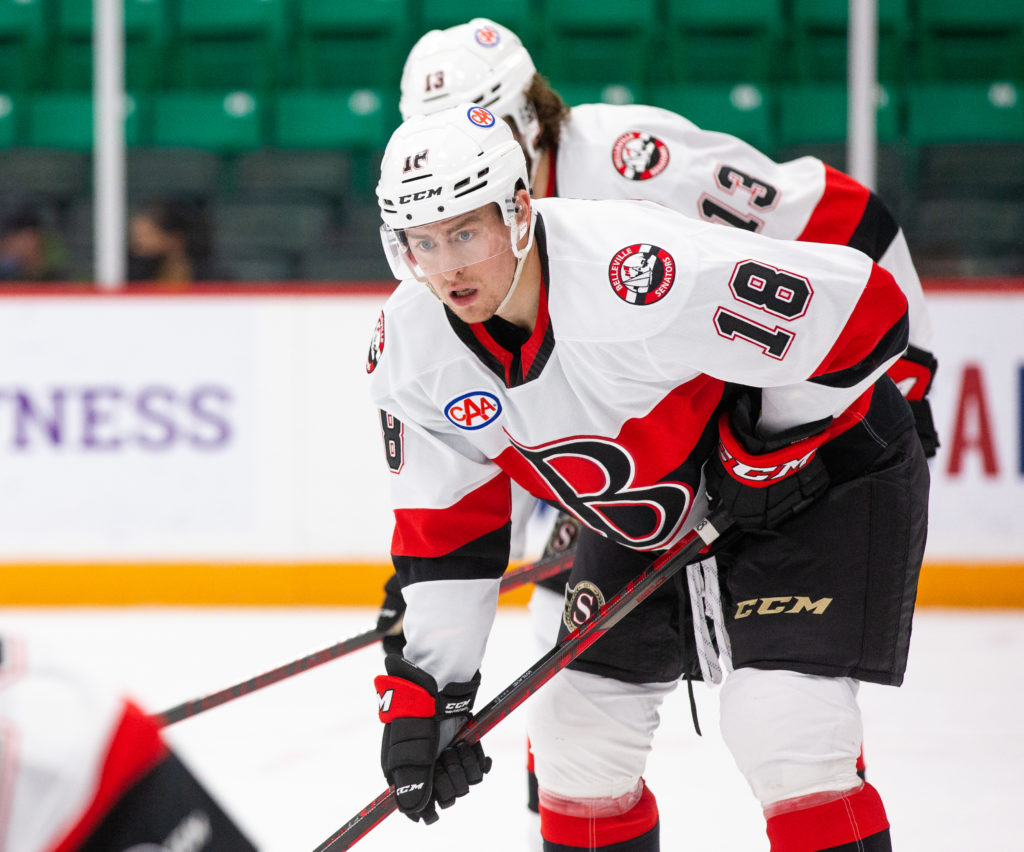 Chris Wilkie has always known of the Senators interest in retaining his services, and for a good reason. An intrigue, which has never wavered, has made him the centrepiece of two organizational trades.

Unable to reach a deal with Ottawa after his senior season at Colorado College. Wilkie negotiated an AHL pact with the Rockford IceHogs and made his professional debut with the Chicago Blackhawks top affiliate last season, skating in 22 games. The native of Omaha, Nebraska, collected eight goals and five assists while tying for the league lead in shorthanded tallies.

Losing the numbers game in Rockford, as an influx of NHL contracted prospects pushed the right shot forward down the depth chart, his club decided to make a move rather than sit out a reliable player. Despite the delay, Wilkie was more than pleased to move over and play regularly with Belleville, noting that the aforementioned trade gave him a chance to familiarize himself with the franchise.

“I got pretty familiar with them over the course of that year, unfortunately, with COVID, a contract didn’t work out, and we weren’t able to get it done. I’m excited to get back, and It makes me feel pretty good that they wanted me back the second time, and I want to prove them right.”

Pressed into service, Wilkie scored and added an assist in his first game with his new teammates. A feat even more impressive if you consider that the 25-year-old endured an air commuter’s nightmare before making his debut. After enduring a four-hour delay at O’Hare International Airport, the skilled forward arrived at CAA Arena shortly after 5 p.m. on game day, roughly 12 hours after leaving Illinois.

Wilkie, who was able to stay positive despite the aviation fiasco. Showcased his much-required offensive talents much to the delight of his new head coach, who required his stability as injuries and recalls were constantly reducing the number of capable AHL forwards available.

“One of the reasons we acquired him was to add some scoring because our offence hasn’t been a strength early on, and he’s a pure goal scorer,” Troy Mann said. “We saw that on the first night when he was able to be patient and make a nice play to get an assist, then obviously that shot that he scored. He’s one of those players where some nights you might not notice him, but he’s still going to get on the scoresheet because he might just need one chance to put the puck in the net. He’s fit in well so far, and we’ll look for him to hopefully contribute in the goal scoring department moving forward.”

Since he arrived in the Friendly City, Wilkie has been a fixture on the team’s scoresheet, with four points (two goals and two assists) In four games.

“It’s always nice to help out the team. Being the new guy and gaining some trust amongst the coaches and the players.”

The Senators next home game is Saturday November 27, 2021 against the Laval Rocket as the team celebrates Hockey Fights Cancer night. Tickets are available via Ticketmaster or by visiting the CAA Arena Box Office.