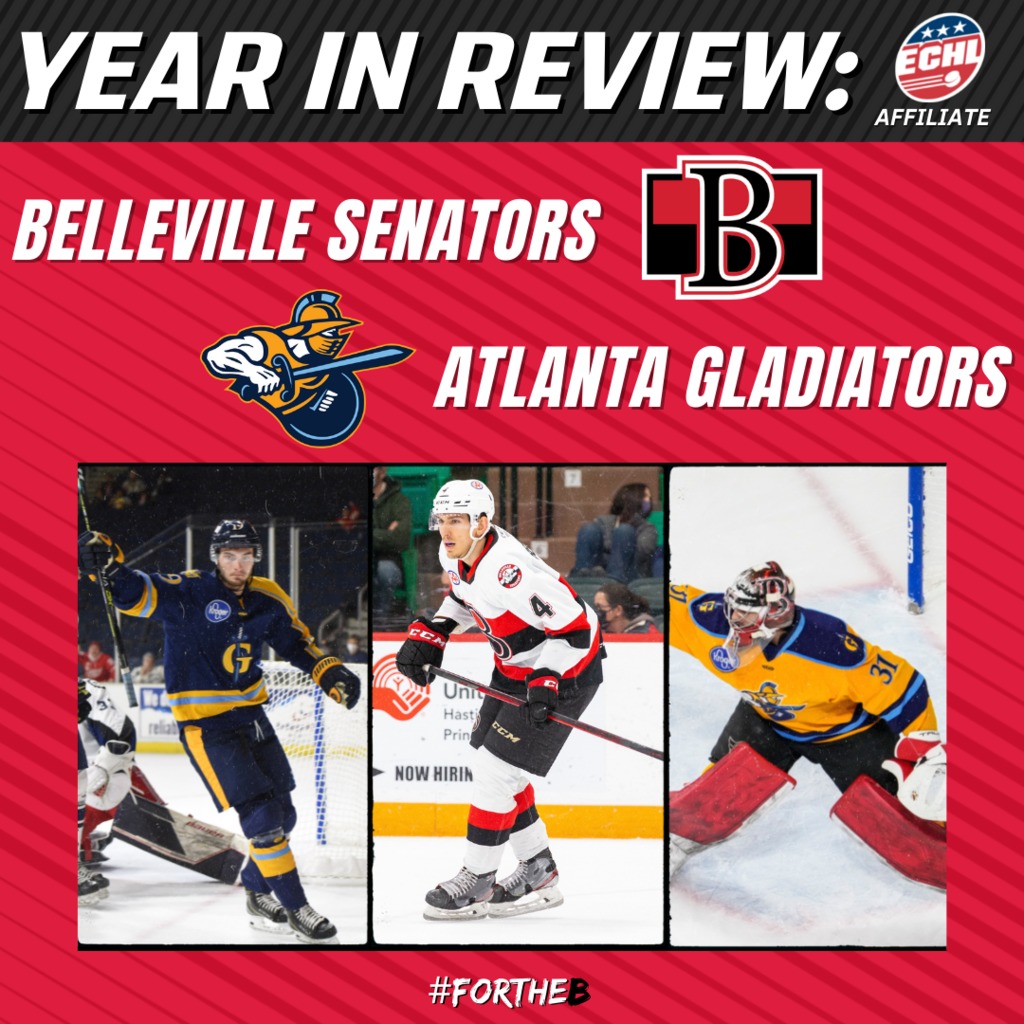 Last season the Senators’ organization was facing a difficult challenge. The Belleville Senators were shopping for a new ECHL affiliate after their long-time ECHL affiliate, the Brampton Beast, had ceased operations due to concerns over the COVID-19 global pandemic. At the same time, the Atlanta Gladiators were searching for a new parent club. After a conversation between head coaches Jeff Pyle and Troy Mann, more formal negotiations began, and the organizations quickly reached an agreement, much to the relief of their respective bench bosses.

“My coaching career began when Jeff Pyle was with the Gwinnett Gladiators, and he had some really good teams. I always liked him,” Mann said. “We always got along because when I was in Columbia, South Carolina, we played them 12 times a year. When he reached out to me, I set him up with Peter MacTavish (Assistant General Manager) and Sean McCauley (Manager, Hockey Operations), and they worked it out.”

“I think under the circumstances of going out and finding a new ECHL affiliate,” Mann continued. “I think you have to be happy with Atlanta. I don’t think you’re ever going to get something as close as Brampton, which was ideal from the travelling perspective, but when we looked at the number of openings last year, Atlanta was the best fit because of direct flights into Toronto. We were able to get guys in quickly even though we had to deal with COVID and testing, and obviously, that will disappear as we move forward.”

“I thought it was a good fit with my familiarity with Jeff Pyle, and they had a good year. They had a pretty young team, and they went through their injuries as well. I’ve been in that league as well, so I know that when you’re down in numbers, it’s a scramble. We talk about scrambling at this level, but at times it’s a real scramble down there when you have to find players, and I believe the SPHL (Southern Professional Hockey League) has grown over the years, and the calibre of hockey has gotten better since it started, but it’s not easy finding guys. I’m a believer in the three-tier system, and I know some teams do it well, and from experience.”

“I think Washington does it very well with Hershey and South Carolina. They certainly do a good job of balancing and using their affiliate. Peter McTavish’s philosophy is to go to your ECHL affiliate unless absolutely you have to go outside, and we’ve tried to do that with Brampton and Atlanta.”

“Sometimes you have no choice, and you get so decimated with injuries that you have to go outside. We saw that this year we had to go to Fort Wayne, South Carolina and Toledo for defensemen and the goaltending situation. It’s never easy, but you certainly like to stay and use your affiliate as much as possible.” 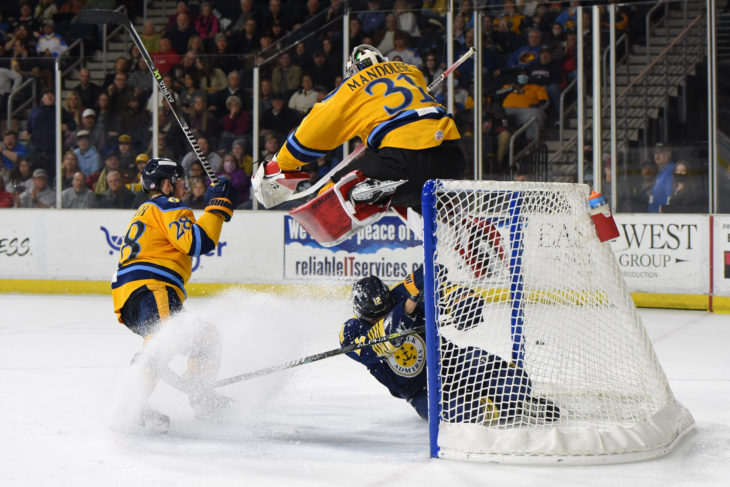 Key contributors jet in from Atlanta

Despite the challenges, some of the mutual successes of both organizations were also apparent. Not only did both teams qualify for the postseason in their respective leagues, but the franchises also saw players perform at high levels and continue on the right developmental path, all while establishing a well-travelled pipeline that accounted for more than 30 transactions in the 2021-22 season. In total, eight players would spend time in Georgia and the Friendly City. Some key contributors included: Xavier Bernard (D), Mitchell Hoelscher (F), Kameron Kielly (F), Tyrell Goulbourne (F), Tyler Parks (G) and Kevin Mandolese (G). Belleville also signed centres Hugo Roy and Luke Nogard to professional tryout agreements.

The Belleville Sens hold a great deal of respect for the Atlanta hockey organization and coaching staff and the feeling is clearly mutual from the other side of the affiliation agreement as well. Head Coach and Director of Hockey Operations Jeff Pyle and Team President Jerry James spoke highly of their strong relationship with the Senators hockey operations staff. While it may cost them players in some instances, the affiliation agreement is obviously a major part of James’ and Pyle’s planning for the future of their club.

“We had a great year this year, and we wouldn’t have been able to achieve what we did without all the help from Belleville and Ottawa,” Pyle said. “People outside the organization don’t realize how many players came to us because of the relationship with Ottawa. It helps our recruiting and keeps the guys focused when they know the affiliation will use our players as call-up guys. We get to network and learn from people that can only make us better. It was a great relationship and a great group of people to work with.”

James also said, “Our relationship with Belleville was a key factor to our success this season. We led the league in home wins and had our highest finish in the standings since 2013. Much of that was due to players like Roy, Hoelscher, Kielly, and others who received playing time with the B-Sens.”

Mike Folta (Director of Broadcast and Communications in Atlanta) is impressed with the partnership agreement and extremely pleased to collaborate with Belleville.

Off the ice, Gladiators’ Director of Broadcasting and Communications Mike Folta was also thoroughly impressed with the collaborative approach and effort made by Belleville’s communication department led by David Foot.

“I had talked to some other ECHL broadcasters, and there is a good number of them that really had no contact with their big brother team in the AHL with media relations or communications staff and for “Footer” to be so receptive to our communications team and help promote us, it makes working together a lot easier. More importantly, it also helps the guys on the ice and brings them more attention. It brings the team more coverage, and it’s a more comprehensive approach to the whole communications scheme when you have two teams that can work together in concert.”

“We’re a developmental league,” Folta continued. “We want to move guys up, and we were able to do that. Guys that played with us got some playing time in Belleville, and hopefully, those are all players that are back up in the AHL next season because that’s the goal. We want to win championships, but we also want to get guys to that next level, and a lot of the guys we mentioned did take that next step or two in their progression, and we’ll hopefully become more of a staple with Belleville and in the AHL.” 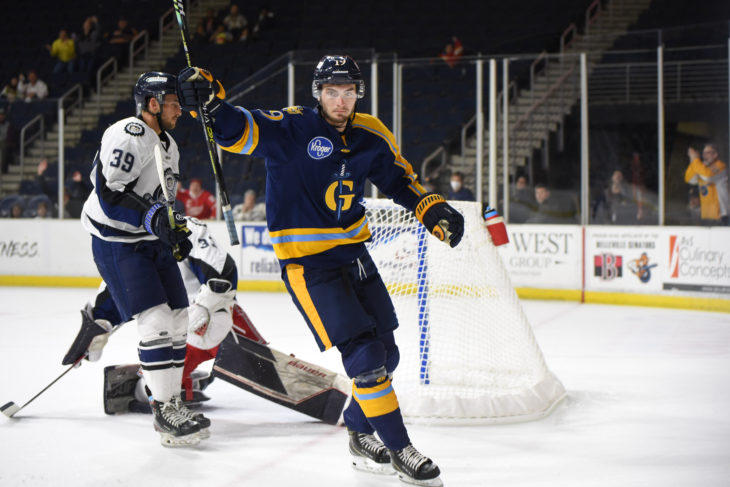 The Senators and Head Coach Troy Mann are already looking forward to building off a successful season and are focused on building his roster and the organizational depth with the help of Pyle and Atlanta’s team executives.

“Jeff was good last summer at throwing me names and saying, ‘hey, this guy could give you some games,'” Mann said. “The banter back and forth was pretty open because it wasn’t just him picking guys. There was certainly communication between Peter, Sean, myself and Jeff in terms of who was coming in from a free-agent perspective if a name came across Peter’s desk in terms of looking for AHL/ECHL contracts which usually happens in August because everyone wants the NHL deal, then the AHL deal. So it gets down to guys looking for two-way AHL contracts. Some guys don’t want to be open to all 32 AHL teams. They prefer to sign with Atlanta as a free agent and come to Belleville’s camp, [let us] get our eyes on them, and be open to all 32 teams, like Hugo Roy. In contrast, he spent a lot of time here with us and played in Atlanta. He was free to go anywhere. It just depends on the player and agent.”

“We had a chance to look at some guys at training camp last year, which is always good because you can sometimes find guys coming through camp and for me, I’m a visual person, so I like to see the players and get formalized with them,” Mann said. “I would prefer to call up someone that I’ve seen rather than going on a recommendation because you never know. That’s why I like to have guys that come into training camp that could potentially be a recall, so when you are negotiating with our ECHL affiliate, we want to make sure that even though there are only a number of camp spots that the quality of players coming in because if they do a good job in training camp or have a good pre-season game then down the line they might get a look and that’s my philosophy.”

Affiliation agreements are often in flux, and there is no real substitute for having an ECHL club in-province. Belleville and Atlanta, however, have found ways to make their partnership work through mutual respect and close collaboration. In 2021-22 each club found considerable success by grabbing spots in their respective league playoffs. Perhaps players from the Atlanta-Belleville system will soon help bring playoff hockey to Canada’s capital at the NHL level.