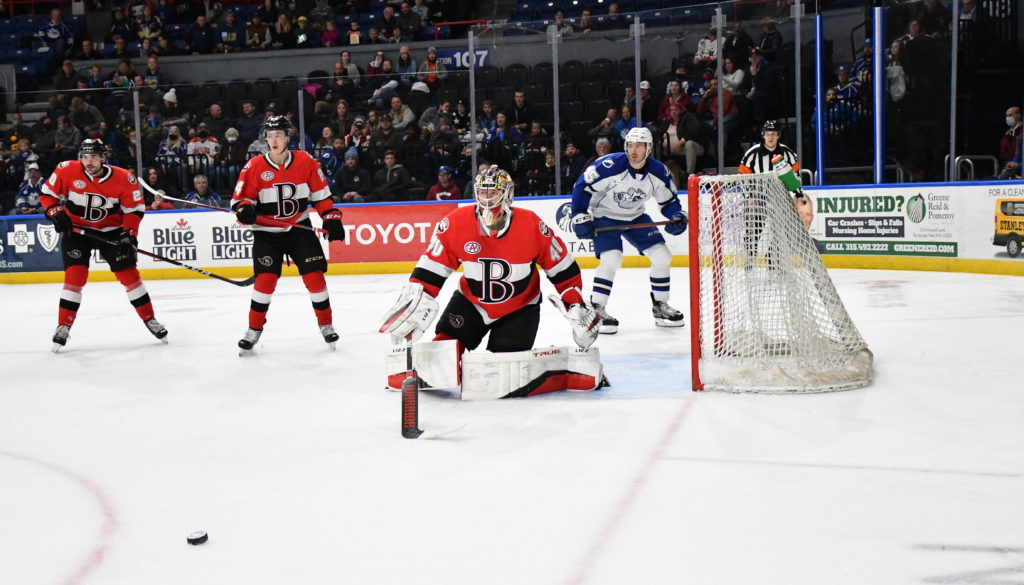 Cedric Pare scored his first pro goal and Mads Sogaard stood on his head making 38 saves on 40 shots, to help the Belleville Senators steal two points from the Crunch in Syracuse on Wednesday night.

Chris Wilkie and Jake Lucchini also tallied for the Senators, with 21 of Sogaard’s stops coming in the third period, to seal the win. It was just Belleville’s second victory in Syracuse in franchise history and was Belleville’s fifth win in the last seven games.

Gabriel Dumont and Gabriel Fortier both scored for the Crunch.

The Senators came out with some jump putting five shots on the Syracuse net inside the first 5:00 and would open the scoring on the power play at 7:15.  Wilkie finished off a scramble in front of the Crunch net and buried his second goal of the season. Pare would make it 2-0 exactly 3:00 later. He netted his first career American Hockey League goal by following up on a rebound, after a nice rush by fellow rookie Phil Daoust.

Lucchini would extend the lead to 3-0, with his seventh goal of the campaign  at 5:11 of the second. Egor Sokolov rushed down the left side and took a shot on goal and Lucchini knocked the rebound off the stick of a Crunch defender and into the net. Syracuse would cut the lead to 3-1 courtesy of Dumont’s seventh of the year at 12:36, with that score standing through 40 minutes.

Syracuse put on a strong push through the third period, pounding 21 shots on Sogaard and counting once. Fortier scored his fourth of the season at 10:29 to cut the Belleville lead to 3-2, but the Senators would hang on for the win.

Senators Head Coach Troy Mann felt his team controlled the game up to the point of being ahead 3-0, citing Syracuse’s power play goal as a turning point.

“When they got their power play goal the momentum certainly shifted to them. As a young team, that was our time to regroup and go back at it, but we were on our toes for the whole final 20 minutes. You have to give Sogaard some real credit as well for how way he played, specifically down the stretch in the last five minutes.”

Mann also pointed to the success of his young core of players in the Wednesday night win.

“I thought our kids were good tonight. Guenette played with some composure, Phil Daoust played maybe his best game at centre and was very noticeable and Roby Jarventie was quite noticeable as well. So, when those guys are getting noticed close to the 20 game mark of the season, that’s certainly progress from our perspective.”

“It was a good learning experience,” Mann says. “I’ve coached a lot of games in this building and it’s very difficult to win here, so we’ll take the two road points, be one game closer to .500, enjoy tomorrow and go back at it on Friday.

You can click here to read the full box score from Wednesday night.

Single-game tickets for other games this season can be purchased via Ticketmaster by stopping by the CAA Arena Box Office. Season Ticket Memberships and Flex Packs are also available, with more information available at bellevillesens.com.