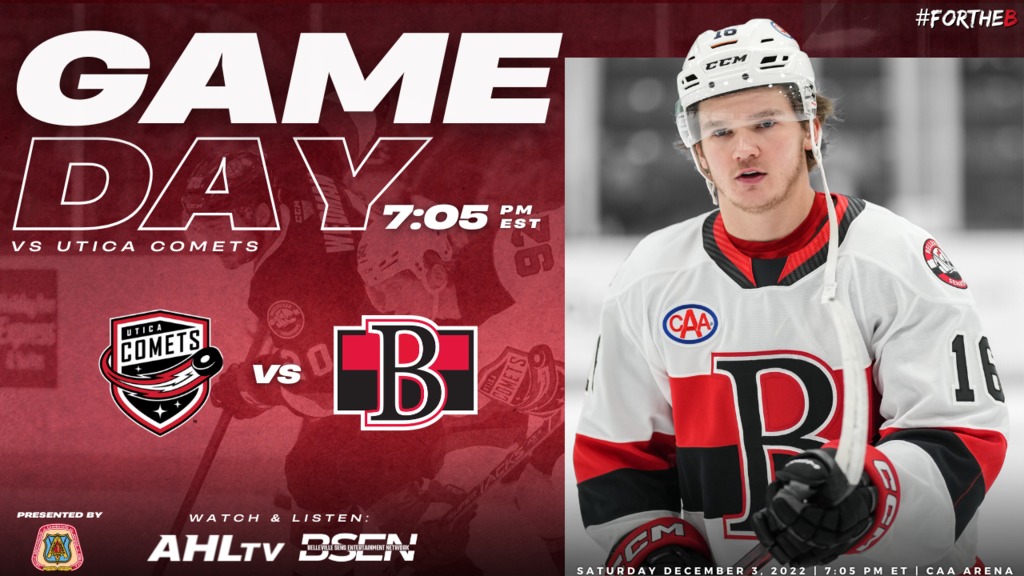 An evening after a solid 6-4 win over the Syracuse Crunch, the Belleville Sens play their second game of a three-in-three weekend at home tonight, welcoming the Utica Comets for the first time this season. Jared Lukosevicius paced the Sens attack against Syracuse Friday, scoring his first career AHL hat-trick, while Rourke Chartier, Cole Reinhardt and Scott Sabourin also found the net. Goaltender Antoine Bibeau made 35 saves to record his second consecutive win. The Comets dropped a 4-3 decision to the Toronto Marlies on home ice on Friday, and have lost three-of-four games, since beating Belleville at the Adirondack Bank Center a little over a week ago.

Tonight’s visit from the Comets is Utica’s first to the Friendly City this season. It’s also the second-of-six matchups between the North Division foes. Utica took round one of the season series on November 23, earning a 3-2 win at the Adirondack Bank Center, despite goals from Jarid Loksevicius and Cole Cassels, and a 24-save performance from Kevin Mandolese. Lifetime against the Comets, the Senators are 13-11-1-0, with a 7-5-1-0 record at CAA Arena.

There are just a few minor changes to Belleville’s lineup from Friday’s win. Troy Mann will shuffle the lines slightly, moving Jake Lucchini up to play with Egor Sokolov and Angus Crookshank, while Rourke Chartier drops down alongside Cole Reinhardt and Viktor Lodin. The other changes are on the back-end, where Xavier Bernard draws back in for Jacob Larsson, who was called back up to Ottawa and Kevin Mandolese starts in goal. He’ll be backed up by Antoine Bibeau.

Senators forward Jarid Lukosevicius had his first career AHL hat trick on Friday and tallied the last time the Sens and Comets met, as well. Despite only scoring four times so far this season, the Squamish, BC native does have a knack for finding the net. He scored 59 goals in 116 Junior A games in the BCHL, before moving on to the University of Denver, where he put up 62 goals in 158 games, winning an NCAA Championship in 2016-17. Fellow ECHL call-up Tyler Boucher will also look to have another strong game, after adding three assists in Friday’s win over Syracuse.

For the Comets, Reilly Walsh brings a three-game point streak into tonight’s contest. The third round draft pick to New Jersey in 2017 (81st overall) has 10 points in 17 games played (two goals, eight assists) this season, including an assist and three shots on goal in Friday’s loss to Toronto. Wingers Jack Dugan and Nolan Stevens each have points in back-to-back games, with Stevens scoring on Friday.

Tonight’s game can be seen on AHL TV, or heard live on the Belleville Sens Entertainment Network. Pregame coverage starts at 6:45 p.m. (ET) with David Foot and Brock Ormond.