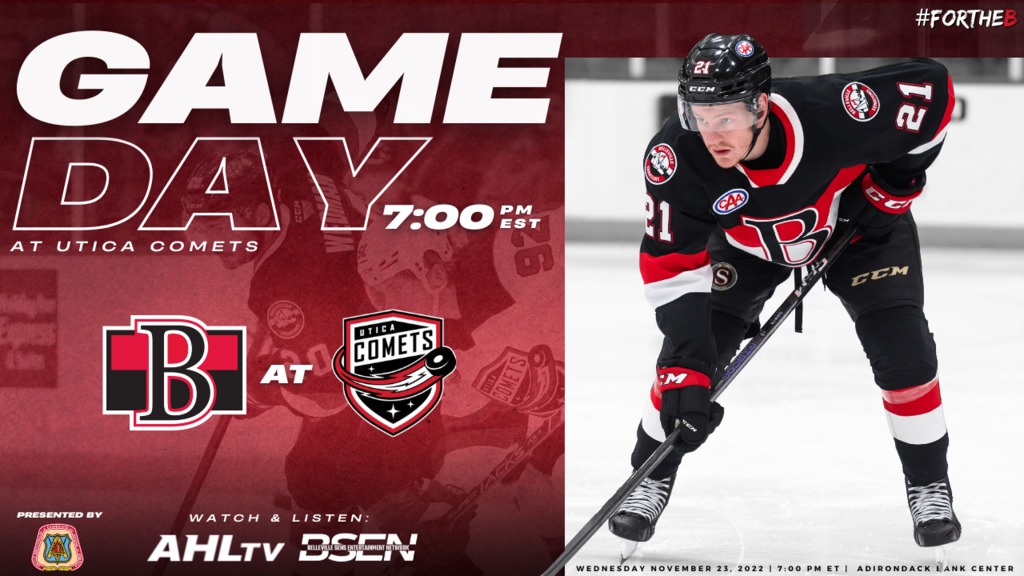 It’s a new week for the Belleville Senators and after going 3-1 on their four-game homestand last week, they’ll try to continue to build momentum on the road, as they travel to Utica, New York, to face the Comets for the first time this season. The Sens are coming off a 5-4 loss to the Syracuse Crunch, which saw them go down 4-0 in the first period, before battling back and ultimately coming up short. The Comets only played twice last week, splitting a home-and-home series with the Rochester Americans, as they try to start a climb out of the North Division basement.

This is the first meeting of the season between the Senators and Comets, after Belleville put up a 3-2-1-0 record against Utica in 2021-22. Lifetime against the Comets, the Senators are 13-10-1-0, with a 6-5-0-0 record at the Adirondack Bank Center in Utica.

The revolving door that is the Sens roster continues to turn today. While Kevin Mandolese is back from injury and set to start tonight, Ridly Greig did not make the trip, as he deals with an upper body ailment. Viktor Lodin also stayed back in Belleville, as he’s out sick. Because of that, the Senators have signed Matthew Boucher to another PTO this week. The Sens also swapped defenders with the parent club in Ottawa this week, with Lassi Thomson heading up to the AHL and Jacob Larsson coming back to Belleville.

With a goal last Saturday, Senators forward Egor Sokolov has become the franchises new all-time leading goal scorer, surpassing Drake Batherson’s record of 38 goals. The 22-year-old from Yekaterinburg, Russia has been developing into a more well-rounded player this season, putting more of a focus on his play off the puck, but has still scored five times, with 11 assists.

Comets winger Andreas Johnsson has been red hot lately, notching 11 points over his last seven games played. The 28-year-old from Sweden was originally drafted by the Toronto Maple Leafs in 2013 and has played close to 250 NHL games, along with 137 games in the AHL, which included a Calder Cup title with the Toronto Marlies.

Tonight’s game can be seen on AHL TV, or heard live on the Belleville Sens Entertainment Network. Pregame coverage starts at 6:45 p.m. (ET) with David Foot.