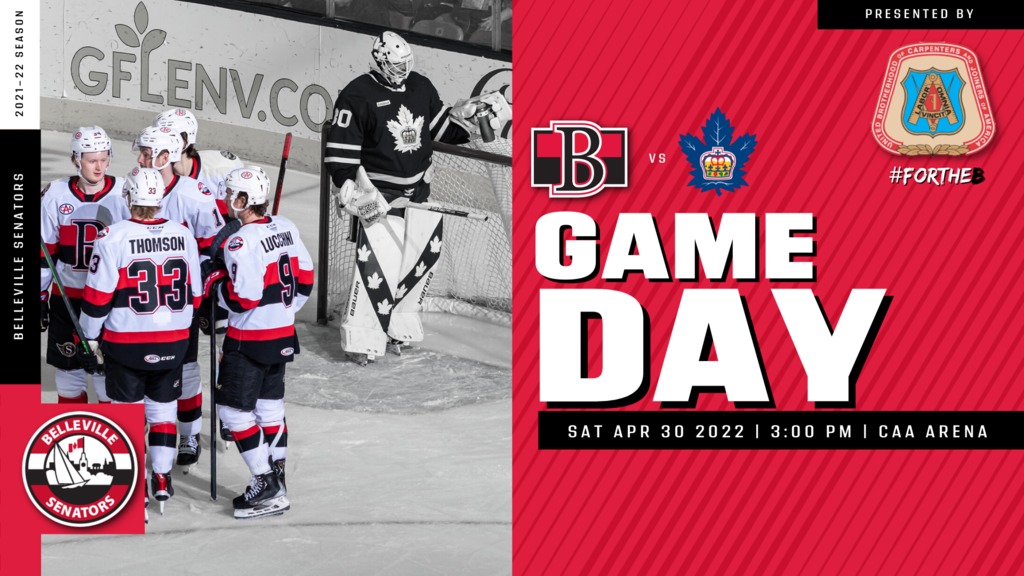 The Belleville Senators may have already clinched their first berth in the Calder Cup Playoffs in franchise history, but the 72nd and final game of the 2021-22 American Hockey League season will still have a lot riding on it. The Senators host the Toronto Marlies at CAA Arena this afternoon, on Fan Appreciation Day, with an opportunity to still improve their playoff position. A Belleville victory, combined with a Laval loss to Syracuse, would see the Senators hop past the Rocket and into third place in the North Division, earning them a bye past the first round of the playoffs. A Belleville regulation win would also spoil their provincial rivals’ chances at getting into the playoffs, forcing the Marlies to miss the postseason for the first time since 2011, while allowing the Rochester Americans to claim the division’s final spot.

A win today would earn Belleville a draw in the 12-game season-series with Toronto. Belleville is 5-6-0-0 against the Marlies this season with a record of 2-3-0-0 at home and  and 3-3-0-0 away. In their last meeting, Captain Logan Shaw scored to open the game and also notched the game-winner, as the Sens clinched their first ever playoff berth with a 4-3 win. Mark Kastelic and Viktor Lodin also scored for the Sens in Toronto last weekend, while Filip Gustavsson made 32 saves. Lifetime against the Marlies, the Sens are 27-22-2-2 and 11-14-0-1 at CAA Arena.

Now that Ottawa’s NHL season has ended, the Belleville Sens have some reinforcements on the way. Viktor Lodin returns after making his NHL debut in Philadelphia on Friday night, with Mark Kastelic, Scott Sabourin and Filip Gustavsson also coming back from their recent call-ups. Gustavsson will start in goal today, backed-up by Mitch Gillam. Parker Kelly will also re-join Belleville to help with the playoff run, but won’t play this afternoon. Belleville’s other scratches include Xavier Bernard and Mitchell Hoelscher, who have been returned from the ECHL Atlanta Gladiators, along with Jack Dougherty, Rourke Chartier (IR), Chris Wilkie, Cedric Pare, Max Guenette, Kevin Mandolese (IR) and Mads Sogaard (IR).

Senators leading scorer Jake Lucchini, who has 51 points (20 goals, 31 assists) so far this season, will become the only Belleville player to dress in all 72 games this campaign. The native of Trail, BC has five assists in his last six games played and has notched six points (one goal, five assists) in 11 games played against Toronto this season. Egor Sokolov has been Belleville’s best performer against the Marlies in 2021-22, putting up 10 points (four goals, six assists) in 10 games played.

Marlies’ utility player Joseph Duszak, who has played both forward and defence for Toronto this season, was named to the American Hockey League’s 2021-22 Second All-Star Team this week. He sits second in points (52) and assists (45) among AHL defencemen this season. He also has 16 points (three goals, 13 assists) in 20 career games against Belleville, including five points (one goal, four assists) in seven games against the Senators this season.

Today’s game starts at 3:00 p.m. ET and can be heard on the Belleville Sens Official Broadcast Partner 800 AM CJBQ, with Jack Miller and David Foot (Broadcast time is 2:50 p.m.). The game can also be streamed live on AHL TV.

CAA Arena is back to 100% capacity, with no vaccine mandate in place. Masks may be worn at fans discretion, as well as by some members of the Senators and CAA Arena staff, but are not currently required. Other local and provincial COVID-19 guidelines must still be followed. There are an extremely limited number of tickets still available for today’s game, which can be purchased at the CAA Arena Box Office.

Tickets for Belleville Sens playoff home games this season can also be bought at the box office, or via Ticketmaster. Season Ticket Membership renewals and Flex Packs are also available with more information available at bellevillesens.com.