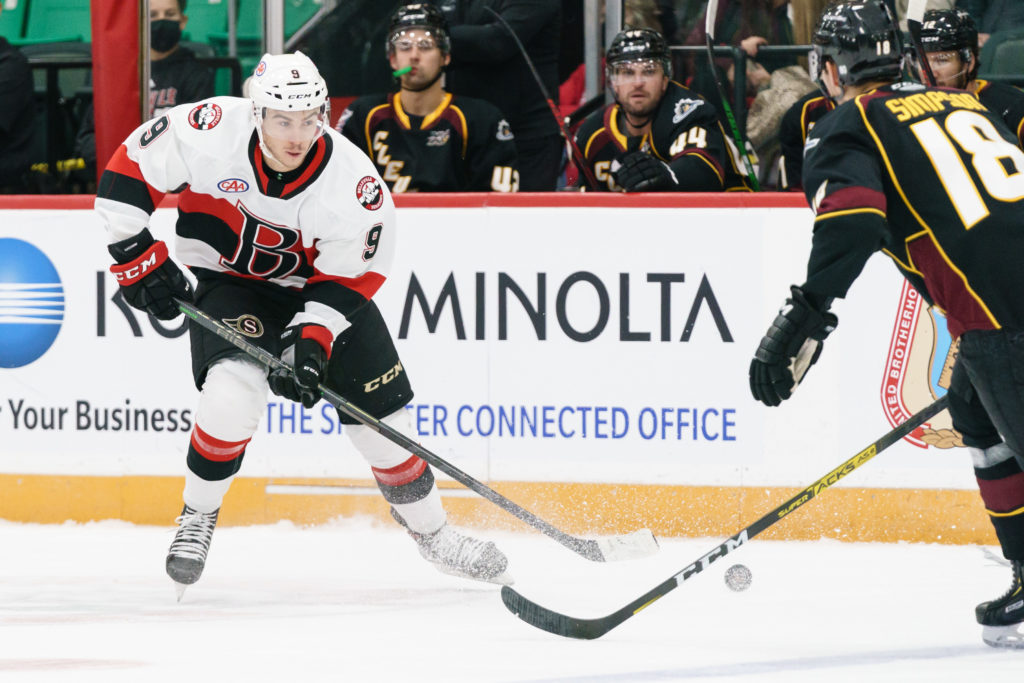 After an early-season trade brought Jake Lucchini to the Friendly City, he has become a mainstay in a Belleville Senators’ lineup that has been in constant flux since opening night. The team has completed no less than 52 transactions due to a rash of injuries and COVID-19-related recalls to Ottawa.

The versatile forward has excelled on special teams and played both left-wing and centre as needed. Lucchini currently paces the AHL Senators in scoring with 12 points and six goals through 13 games, effectively doubling his offensive totals with the Laval Rocket in the pandemic shortened 2020-21 season.

“I just tried to come here and have a positive impact on the team. I don’t really set a lot of goals for myself. I just try to come in every day and try to get better and try to help the team however I can,” the 26-year-old said.

Signed to an AHL deal for the 2021-22 campaign, the 2019 Michigan Tech grad has developed a solid rapport with his new bench boss, Troy Mann. (Jake majored in Sports Management and minored in coaching in U.S. College).

“He’s a very intense coach, and I do really like that. I want to be challenged. I just want him to have faith in me for him to put me on the ice at any time. So far, it’s been really good,” Lucchini noted of Mann.

Likewise, Mann has nothing but praise for his alternate captain. “He’s been a fabulous pick-up for us, and a guy we’ve really enjoyed coaching,” the head coach commented.

Belleville ranks amongst the league’s youngest teams. The club has depended on the even-keeled five-year veteran to provide leadership amidst some early-season adversity.

“I just try to help them as much as I can, whether I just try and lead by example, or if they need to talk about something or advice. I just try to be a voice for them and help them through whatever they’re going through. All our young guys are really good guys, and sometimes you just want to say something to try and help them out, but for the most part, they know what they’re doing and are doing a good job.”

Jake acknowledged he was shocked when Laval elected to trade his rights to Belleville. He also noted that finding his groove was a bit difficult amid so many roster moves. At the same time, he said he was thrilled to be offered such a prominent role with his new club and to grow his offensive game.

If his great play continues, Mann and team executives will most certainly advocate to keep him in a substantial role moving forward.

But for the moment, Lucchini has found a home. The native of Trail, BC, away from the rink, recently moved out of his hotel accommodations and is ready to enjoy life among the fans and residents in the Bay of Quinte Region.

“It’s been awesome so far. I’ve been getting a really great opportunity, and it’s been a lot of fun.”

“The fans are great. The rink is awesome.”