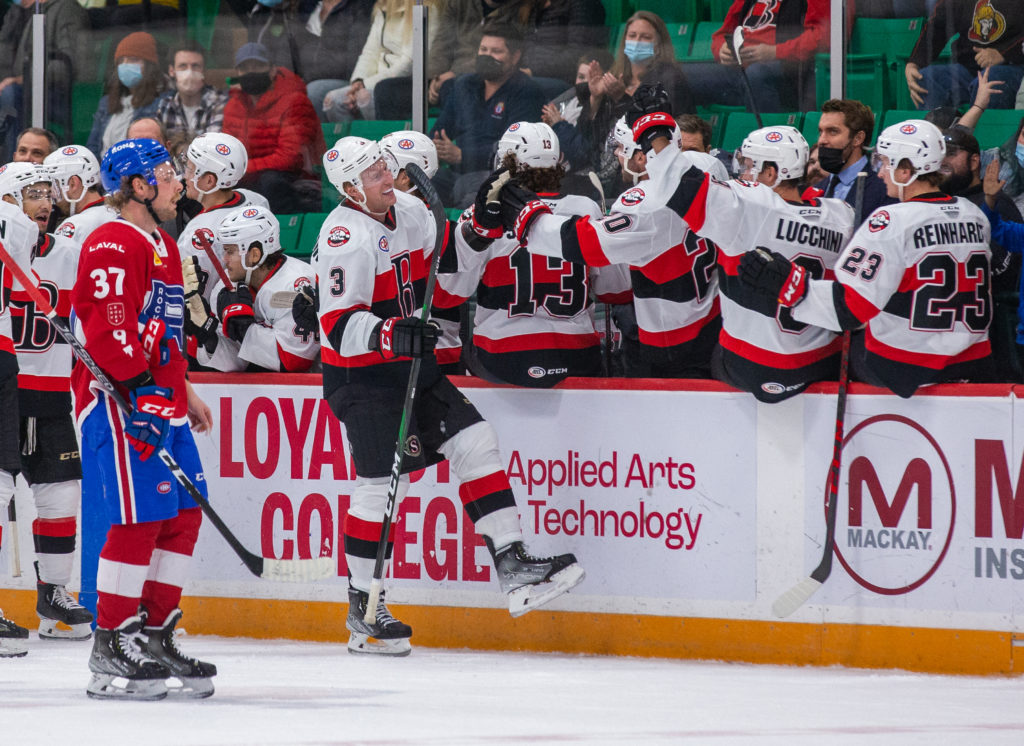 The Belleville Senators made good use of their man advantage, capitalizing on two second-period power plays to defeat the Laval Rocket on Saturday night, 5-2 at CAA Arena.

Belleville would settle into the game after Mark Kastelic and Lukas Vejdemo traded tallies in the first period. Defencemen Zac Leslie and Maxence Guenette (first AHL goal) scored goals from the point to take a 3-2 lead after the second stanza. The third period saw the B-Sens seal the win with two empty-net goals from distance as Dillon Heatherington and Matthew Wedman found the net. Strong special teams play and Mads Sogaard’s clutch saves were evident throughout the night.

Head Coach Troy Mann spoke to his team’s performance in earning a crucial win versus a North Division rival.

“We talked about it all week when you’re only playing one game you’re chasing the standings a little bit and you need to win that hockey game. Obviously they were in the fifth spot and we were five points out with a game in hand. So we felt it was a really important game for us.”

Mann also noted there was a sense of returning to normalcy following a barrage of injuries and COVID-19 recalls.

“There was a real good buzz this morning. I thought it was a very high energy morning skate, the guys were definitely going to be ready for tonight’s game. When you add six players that have been gone for a while and you get one of your leaders and mainstays on the backend in Colby Williams it should be a lift and I felt that’s what happened tonight.”

Postgame reactions from Head Coach Troy Mann and Mark Kastelic is available at the links below:

The Senators will welcome the Laval Rocket (Montreal Canadiens) next Saturday. Tickets are available by clicking here.

Single-game tickets for other games this season can be purchased via Ticketmaster by stopping by the CAA Arena Box Office. Season Ticket Memberships and Flex Packs are also available, with more information available at bellevillesens.com.