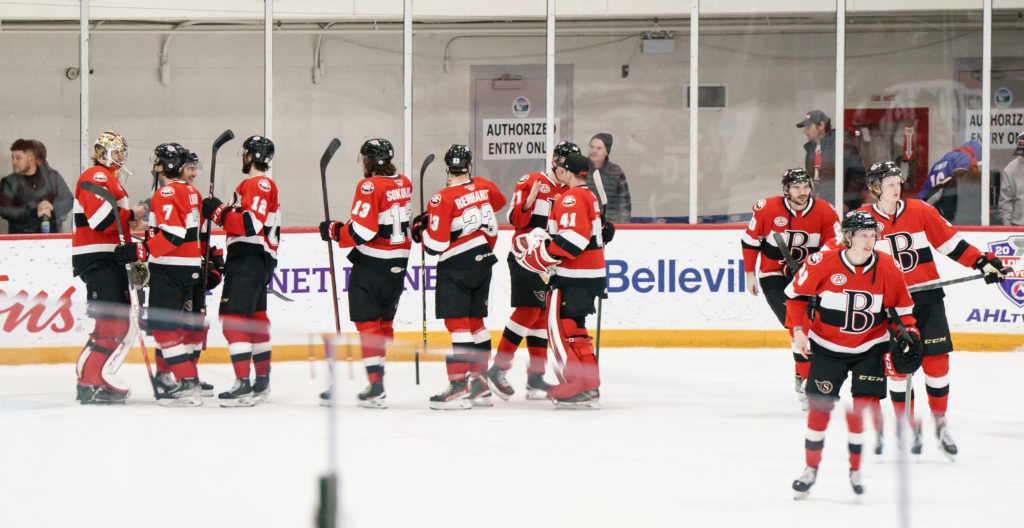 It’s hard to think of a more significant week in the Belleville Senators (39-28-4-0)  franchise history as the team clinched a Calder Cup Playoff spot for the first time. The achievement was hard-won as the club earned a pair of comeback victories over the Toronto Marlies this past week, spilt by a 6-0 shutout road loss to the Syracuse Crunch. Despite that difficulty, the Senators showed their resolve by officially qualifying for the postseason two days later.

Viktor Lodin notched his first career AHL game-winner with 1:19 left to play as Belleville stormed back to defeat the Toronto Marlies 5-4, erasing an early 2-0 disadvantage after twenty minutes of play.

Controlling the contest from the outset, Syracuse tallied six unanswered times while Max Lagace made 27 saves for the Crunch, who shut out the Senators 6-0.

Led by a pair of tallies from Captain Logan Shaw, Belleville rebounded from their previous outing to clinch their first-ever Calder Cup Playoff berth with a 4-3  win in Toronto.

Belleville Sens home playoff games will go on sale starting Friday (April 29th). CAA Arena is back to 100% capacity, with no vaccine mandate in place. Masks may be worn at fans discretion, as well as by members of the Senators and CAA Arena staff, but are not currently required. Other local and provincial COVID-19 guidelines must still be followed.