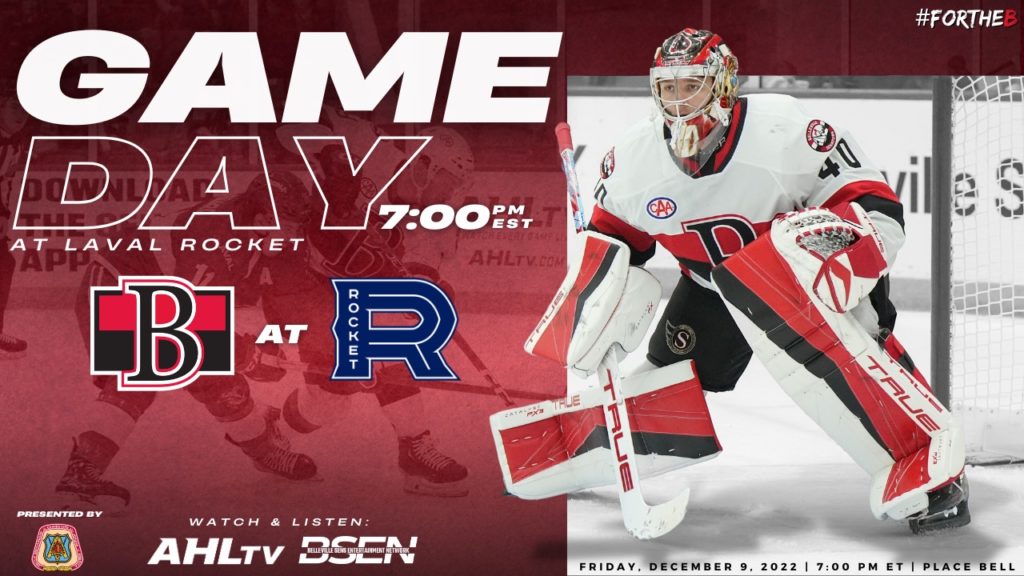 Following a gritty win over the Marlies in Toronto, the Belleville Sens six-game Canadian road swing continues tonight in Laval, where they’ll play the first of back-to-back games against the Rocket. The Senators were able to grind out a victory against their provincial rival on Wednesday, thanks to 35 saves from Antoine Bibeau and goals by Viktor Lodin, Brennan Saulnier, Angus Crookshank and Jake Lucchini. The Rocket are coming off back-to-back losses against the Canucks in Abbotsford and are trying to turn things around, to start a pre-Christmas climb up the North Division standings.

It’s good news, bad news, on the roster front for the Senators tonight. While forward Ridly Greig is back from a seven-game injury layoff, the Sens will be without forward Viktor Lodin for the foreseeable future, after he left the game in Toronto Wednesday following a blindside hit by Marlies forward Adam Gaudette. The only other change comes in goal, where Mads Sogaard will make his first start since November 11 in Syracuse, and will be backed up by Antoine Bibeau.

Max Guenette led the Senators in points on Wednesday, notching two assists, despite suffering a facial injury the previous weekend. The 21-year-old has become a staple on the Senators top power play unit, with his strong puck movement and shooting ability, but was able to create chances even strength as well on Wednesday, putting four shots on goal. He’ll wear a full-face shield again tonight, as he plays in his home province. He has a goal and an assist in five games against Laval this season.

Two Rocket players are riding point streaks coming into the game tonight, with Anthony Richard and Rafael Harvey-Pinard both finding the score sheet in three consecutive games. Harvey-Pinard has two goals and one assist over that span, with an assist and five shots on goal in the Rocket’s last game in Abbotsford. Richard has seven points over his streak (three goals, four assists), including a goal with five shots on net last game.

Tonight’s game can be seen on AHL TV or heard live on the Belleville Sens Entertainment Network. Pregame coverage starts at 7:00 p.m. (ET) with David Foot.