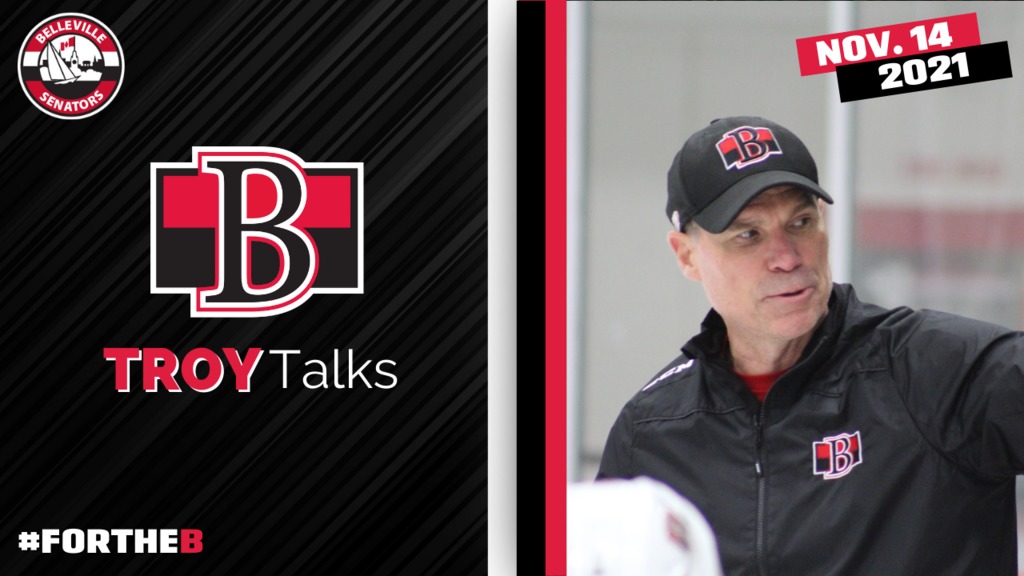 With the news that the Ottawa Senators have had three games postponed amidst COVID-19-related health concerns, questions continue to come up around how that will affect the team in Belleville. We caught up with Troy Mann to get some info on that, as well as what to expect this week, as the Belleville Sens prepare to take on the Laval Rocket on Saturday.

How do you feel the team has handled all of the challenges it has faced in the last few weeks?

“I think we’ve been competitive. The guys compete and I believe that regardless of the talent level of your team, if the guys are competing and you have some structure in place, you have the ability to potentially win every hockey game. This team has faced a lot of adversity in the last couple weeks, there have been a lot of bodies coming in and out and I think we’re up to 38 or 39 players in only 13 games. We’re just not getting opportune goals, which you need to win a hockey game. We stayed in the game in Laval on Wednesday, Saturday we got some clutch goals and won, then I felt on Sunday, even though Utica was overall the better team over 60 minutes, there were some moments in that game where we could have got a goal and given ourselves a chance.”

How important is it to have four days of practice to get the new faces acclimatized and how much of a difference will that make?

“If our roster stays the same between now and Saturday that will certainly help. I think everybody, especially the two defencemen that came in and played with no practice time, played very well. This week, with Ottawa being on pause for seven days, there’s always a chance we get some bodies back for Saturday, which would help. But if that’s not the case, it gives us a whole week to focus on just one game, hopefully get the two points to stay in the mix and move on to next week.”

How is the COVID-19 situation in Ottawa impacting the team here and will we get any players back from the NHL this week?

“Even though Ottawa is shutting down and postponing three games, it doesn’t make sense for those players to come back here. Those guys are part of that seven-day shutdown in Ottawa and once the NHL club resumes practicing, if they do on Saturday as is planned, then they’ll have to make some lineup adjustments based on guys that are coming off COVID protocol. I believe that started this week, but there are a lot of moving parts with their lineup and the numbers they have up there, so we can’t make any type of lineup decisions for Saturday night. All we can do is focus on who is in the room right now and that’s what we’ll do in preparation for Laval on Saturday.”

Chris Wilkie was acquired via trade with Rockford last week and scored in his debut. What does he add to the roster?

“Let’s remember he was also part of the Rodewald trade a couple years ago. So there was a bit of familiarity with him within the organization, even though he didn’t sign with us and went to Rockford. If you look at his numbers in the abbreviated season (nine goals in 23 games), it was a pretty good start to his pro career, but he was unfortunately getting squeezed out in Rockford due to the number of NHL contracts there. He’s a pure goal scorer, he has a tremendous shot as we saw the other night against Bridgeport and I think there may be nights where he looks quiet on the ice but gets on the scoresheet because he’s an offensive guy. I thought his game progressed on Saturday night and for a kid that spent three hours waiting for mechanical issues with his plane, getting here at just after 5:00 p.m. and then contributing a goal, that was fantastic. I think on Sunday it was one of those games where he looked a bit tired and sluggish, but he’s able to get back this week to get acclimated with his teammates and linemates. Scoring has been one of our weaknesses early in the season, so that was one of the reasons we brought him in.”

What’s the plan for the week in preparation for Laval?

“Four practices is an unusual week, but we’ve tried to break it down into four days and four different components. Monday we were off, Tuesday was more of a skills day and Wednesday we’ll do more compete drills, with small area games and guys getting to the net. Then we’ll be able to have two full days of five-on-five practices, along with special teams and I think come Wednesday night/Thursday morning, we might have a better idea of what’s happening in Ottawa with any potential additions. That will allow us to plan the lineup for Saturday a bit more.

“There is one guy looking to come off, Colby Williams will play on Saturday. Jonathan Aspirot and Mitch Hoelscher are still long term and Rourke Chartier is skating but hasn’t been cleared to start contact. Until that happens, he’s not available.”