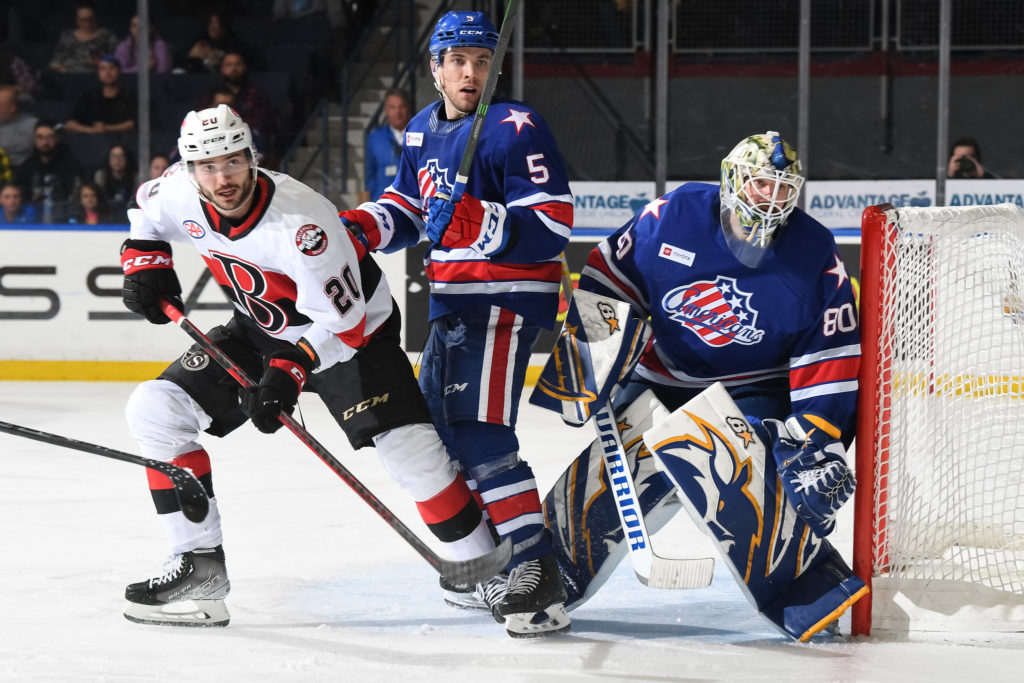 It was a heartbreaking series opener for the Belleville Senators as the Rochester Americans scored four unanswered times to earn a 4-3 overtime win at Blue Cross Arena on Wednesday night.

The best-of-three series will now shift back to the Friendly City, as the Senators will have an opportunity to advance to the Division semi-finals with a pair of wins on Friday and Sunday.

Belleville opened the scoring 7:26 into the first period as Cole Reinhardt scored the first playoff goal in franchise history, capitalizing on the Senators’ first shot of the contest after taking a feed from Egor Sokolov. The Senators extended their lead to 2-0 later in the frame through veteran defenceman Dillon Heatherington who made no mistake finding the back of the net with 1:00 left to play in the period after he was left alone in the high slot.

The middle stanza saw the Belleville continue their strong play on both the offensive and defensive side of the puck. Filip Gustavsson did his part to keep the Senators in front, making 14 saves in the period. While Rourke Chartier marked his return to the lineup after missing six months with a broken finger making it 3-0 by beating Aaron Dell with a nifty move.

In the third period, the high-flying Rochester attack came to life, tallying three times on six shots. Lukas Rousek got the Amerks on the board early in the final frame. Before Jimmy Schuldt brought Rochester to within one at 13:19, Casey Fitzgerald tied the score to force overtime with just under four minutes remaining in regulation time.

Although Belleville controlled the early portions of the extra time and had a litany of quality chances, it was the Amerks who would hit the twine once more as they completed the come from behind win as Arttu Ruotsalainen redirected a point shot at 16:54 of the first overtime to win the game 4-3.

The Belleville Senators will be back in action on Friday, May 6, at CAA Arena for the middle game of their best-of-three game series against the Rochester Americans. If necessary, Game 3 will also be played on home ice this  Sunday, May 8.

CAA Arena is back to 100% capacity, with no vaccine mandate in place. Masks may be worn at fans’ discretion, as well as by some members of the Senators and CAA Arena staff, but are not currently required. Other local and provincial COVID-19 guidelines must still be followed.

Tickets for Belleville Sens playoff home games this season can also be bought at the box office or via Ticketmaster. Season Ticket Membership renewals and Flex Packs are also available, with more information available at bellevillesens.com.