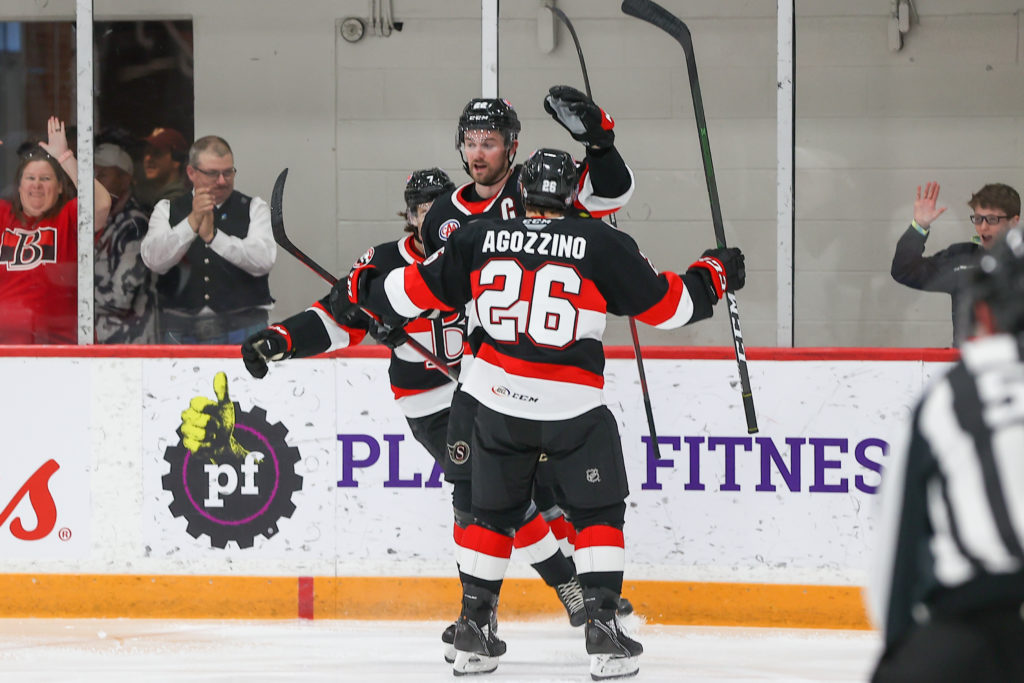 The Belleville Senators concluded their regular-season finale with a 5-2 win over the Toronto Marlies, eliminating their provincial rivals from playoff contention.

Belleville opened the scoring at 5:55 of the first period when Cole Reinhardt notched his 15th of the season on a Logan Shaw rebound. That would be all the tallying in the frame as the Senators took a 1-0 lead after a physical twenty minutes of play.

The Senators extended their advantage to 2-0 through Logan Shaw, who found the back of the net forty seconds into the middle stanza. The Senators’ strong showing continued as Clark Bishop made it 3-0 after he split the defence and finished with a nifty backhander. The Marlies got on the board with 2:45 left in the period through a Josh Ho-Sang redirection.

In the third period, Clark Bishop buried his second of the contest and the Senators’ first empty netter of the evening with 3:18 remaining. Toronto would get one back as Nick Robertson made it 4-2 late in the frame before Andrew Agozzino ended any hope of a Marlies comeback by hitting an empty net with forty seconds left to play in regulation to secure the win.

“We spoke yesterday at practice and again prior to the game about just finishing the season the right way, and whatever happens tonight happens if we have to go to Syracuse; obviously, you’d love to avoid the best of three if possible, but let’s let it play out. Let’s finish strong today get a chance to knock the Marlies out and also get 40 wins for the franchise.”

Following this afternoon’s win, and a Laval win tonight in Syracuse. The Senators will finish fourth place in the North Division and will have a home-ice advantage versus the Rochester Americans in a best-of-three series in the first round of the Calder Cup Playoffs.

The Belleville Senators will be back in action on Wednesday, May 4 in Rochester. As the fourth seed, Belleville will have a home-ice advantage. However, the best-of-three game series will open in Rochester before the series shifts back to CAA Arena in Belleville for Game 2 on Friday, May 6 and Game 3 on Sunday, May 8 (if necessary).

CAA Arena is back to 100% capacity, with no vaccine mandate in place. Masks may be worn at fans discretion, as well as by some members of the Senators and CAA Arena staff, but are not currently required. Other local and provincial COVID-19 guidelines must still be followed. Tickets for Belleville Sens playoff home games this season can also be bought at the box office, or via Ticketmaster. Season Ticket Membership renewals and Flex Packs are also available with more information available at bellevillesens.com.