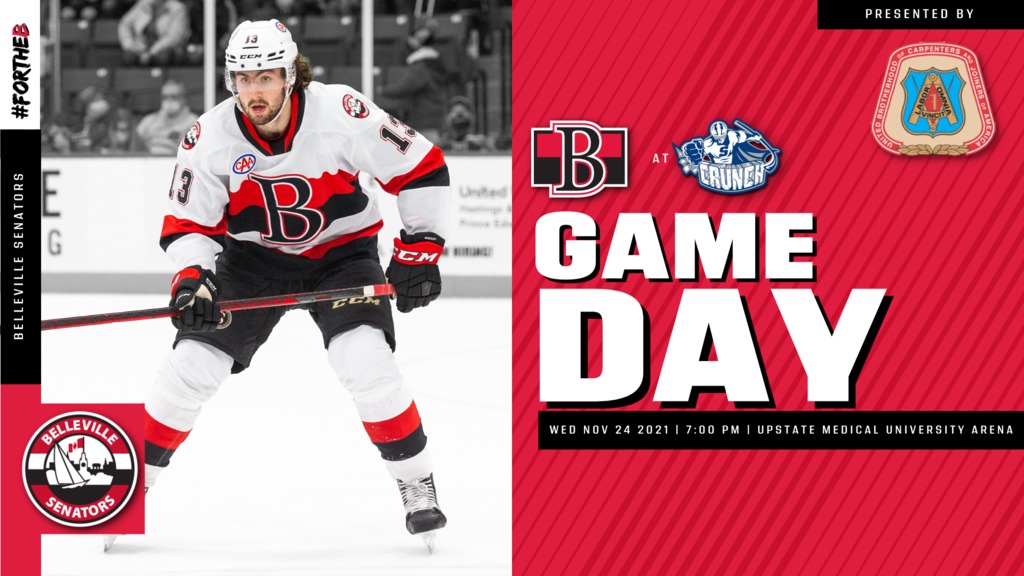 After picking up a crucial early season win against Laval at home last week, the Belleville Senators are back on the road tonight as they visit the Syracuse Crunch for the first time this season. Tonight’s game kicks off a three-game week that also includes a stop in Laval on Friday night, before another matchup with the Rocket at CAA Arena this Saturday for Hockey Fights Cancer Night. The Belleville Sens come into tonight’s matchup just one point back of the Crunch in the American Hockey League’s North Division standings, having won four of their last six games, while Syracuse has lost five games in a row. The Crunch’s most recent defeats came last week when they dropped a pair of contests in Cleveland, 2-1 (OT) and 5-1.

The Senators and Crunch are playing their first of eight meetings of the season tonight, with three of those matchups coming before the new year. Belleville will be back in Syracuse on December 17, 2021 and the Crunch will make their first visit to CAA Arena on December 28. Lifetime, Belleville has a 7-9-1-1 record against the Crunch, but only one of those wins has come in Syracuse. The Senators’ record at Upstate Medical University Arena is just 1-6-1-1 since joining the league in 2017-18.

Belleville’s lineup is looking a little more normal after seven players returned from injury, or Ottawa, prior to the win against Laval, but there have been a few changes. Cody Goloubef was released from his pro try out this week and Clark Bishop was reassigned from Ottawa for an injury rehab stint but won’t play until next week at the earliest. The Senators also acquired defenseman Jack Dougherty from Providence this week, bringing him back for a third season in the Friendly City and will insert him into the lineup on the weekend. Other scratches tonight include Blake Siebenaler, Rourke Chartier (injured), Kole Sherwood, Andrew Agozzino, Mitchell Hoelscher (injured) and Jonathan Aspirot (injured). Mads Sogaard is slated to start in net.

Mark Kastelic snapped a three game pointless streak last weekend notching a goal and an assist. The Phoenix, Arizona native tends to find the scoresheet in bunches, so he’ll look to begin another strong run tonight. Chris Wilkie also has three points in three games since joining the Senators from Rockford.

The Crunch are led offensively by Gabriel Dumont and Charles Hudon, who each have 11 points in their first 14 games of the season. Syracuse’s roster also includes former first round OHL pick Sean Day and former Belleville Bulls forward Remi Elie.

Tonight’s game starts at 7:00 p.m. ET and can be heard on the Belleville Sens official broadcast partner 800 AM CJBQ, with Jack Miller (Broadcast time is 6:50 p.m.). The game can also be streamed live on AHL TV.

Don’t forget to download the Belleville Senators app before game time and follow the Sens social media for updates.

Single game tickets for the 2021-22 Belleville Senators season are now on sale and can be purchased via Ticketmaster, by stopping by the CAA Arena Box Office. Season Ticket Memberships and Flex Packs are also available with more information available at bellevillesens.com.