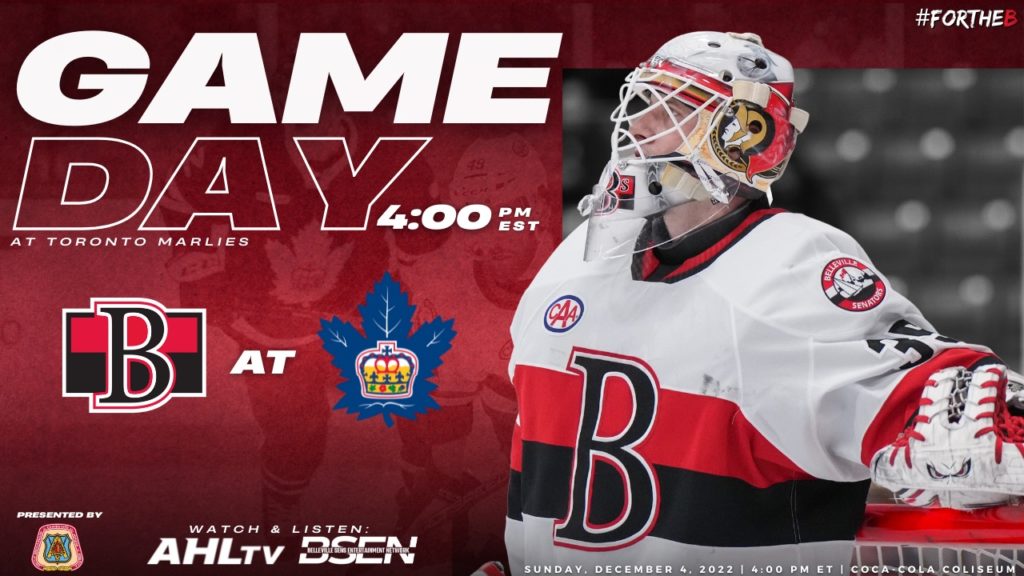 The Belleville Senators finish up a busy weekend in Toronto, as they play their third divisional game in as many days, against the Marlies. The Sens are coming off a frustrating night that saw them put a season-high 46 shots at the Utica net, but lose 7-3 to the Comets, thanks to a strong performance from Nico Daws in net. Rourke Chartier, Egor Sokolov and Angus Crookshank all scored for the Sens, with Kevin Mandolese taking the loss in goal. The Marlies, meanwhile, also lost on Saturday. They dropped a 3-1 decision to the visiting Syracuse Crunch, who had been defeated in Belleville to start the weekend.

This is the third game of a 12-game season series between the Sens and Marlies and Belleville’s first visit to Toronto in 2022-23. The Sens won the most recent matchup, an emphatic 6-1 victory on November 18, which followed up a 5-2 loss to open the season series on November 5.

Troy Mann is making three changes to Saturday’s roster. Forward Brandon Cutler, who is up on a professional tryout offer from the ECHL, will draw into the line-up with Matt Wedman coming out. Defenceman Xavier Bernard will also be a healthy scratch, to be replaced by Alex Breton, who was signed to a PTO over the weekend. He played one game for the B-Sens in 2018, but joins the team now from the Trois-Rivieres Lions, where he’s had two goals, 10 assists and a minus-one rating, in 18 ECHL games. The final change is in goal, where Antoine Bibeau returns, after Kevin Mandolese took the loss on Saturday

Belleville Forward Angus Crookshank is rounding into form as we pass the quarter mark of the season. The 23-year-old from North Vancouver, BC, has six points in his last five games (four goals, two assists), including a goal and an assist last night. He’s also fired 17 shots on net over that span. His 14 points overall (seven goals, seven assists), have him ranked 11th in AHL rookie scoring, while his 55 total shots have him second in that category for rookies.

Two players have been leading the way for Toronto lately, with both Alex Steeves and former Belleville captain Logan Shaw riding four-game point streaks. Shaw has one goal and three assists over that span, including a helper last night. His 23 points overall have him ranked 9th in the AHL scoring race. Steeves has two goals and two assists on his streak, including a goal and eight shots on net last night.

Tonight’s game can be seen on AHL TV, or heard live on the Belleville Sens Entertainment Network. Pregame coverage starts at 3:45 p.m. (ET) with David Foot and Joel Vanderlaan.